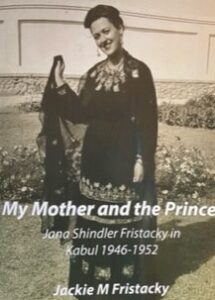 This book by AADO’s President is a true account of her mother’s remarkable life escaping the aftermath of WWII in Europe.

At this time, Afghanistan’s rulers, King Zahir Shah and his able ministers sought to develop and modernise their nation. This brought Jana’s husband, Anton Fristacky, a Czech engineer, to Kabul to work in a joint venture between the Czech firm Skoda and the Afghan Government. Amidst reflections on Europe, the book highlight’s Jana’s love affair with an Afghan noble, her efforts for the emancipation of Afghan women from their veiled state, the birth of her two daughters, exile, house arrest, despair and eventual departure for a new life in Australia. The book covers a period when an independent and neutral Afghanistan faced a positive future, in stark contrast with later tragedies of conflict and disintegration following foreign intervention.

The author, as President of the Afghan Australian Development Association (AADO), is directing all proceeds from the book to AADO to support development projects in Afghanistan.